By the beginning of the 70s the school had expanded considerably.  There were new Art Rooms, Science Labs and a Sixth Form Common Room, as well as the New Hall and the Gym.  Sadly, though, the Common Room and a number of classrooms were destroyed by fire in November 1973.  This memory is from one of the present teachers, then a pupil: “I think I was in Year 8 when, coming down Montague Road one morning, I saw a wisp of smoke rising up behind the trees.  ‘Wouldn’t it be funny’, I thought, ‘if school burnt down?’  It had – and it wasn’t funny!  Sixth formers were walking up and down corridors crying because all their work had been destroyed; teachers were in a panic and there was scary excitement everywhere.  I remember the calming, solemn influence of Sr Josephine as we squeezed into the Old Hall, said a prayer and made arrangements to go home.  The smell of smoke in U4 lingered for years.” 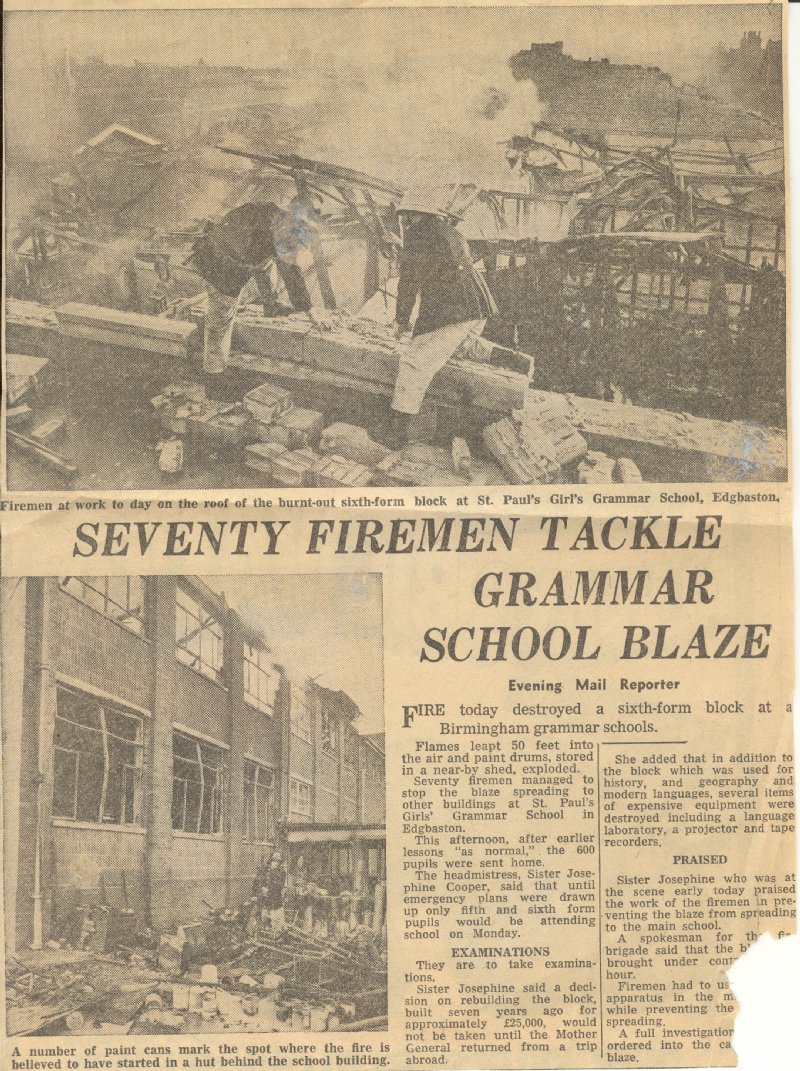 A year later one of the greater events in the school’s history took place – a visit from Mother Teresa of Calcutta, on 12 September 1974.  All the girls were packed into the Old Hall, with the Sixth Form looking down from the windows on the top corridor.  This is what one of Mother Teresa’s co-workers wrote: “We made our way to St. Paul’s Convent, Birmingham for lunch, followed by a visit to the attached Grammar School where Mother made a tremendous impact.  One moment the hundreds of girls were chattering like magpies, the next moment, when they realised Mother was there you could have heard the proverbial pin drop.  Then came the applause and the smiles.  Flowers were presented, in fact Mother’s path seemed to be strewn with flowers that day, each gift being placed on an altar to the honour and glory of God.”  She spoke to the girls in a gentle, quiet voice but every word could be heard and there was a sense of stillness in the Hall that had never been there before and never quite been achieved since.

Two months later, on Remembrance Day,  11 November 1974, the school had its very own trumpeter to play the Last Post for a special Remembrance Day Assembly.  Once again the windows on the top corridor were opened and the sound of the trumpet came down to the Hall below.